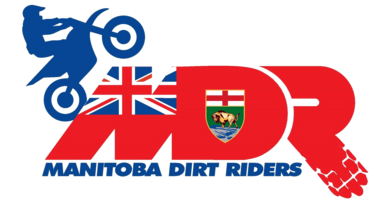 OUR MISSION
Manitoba Dirt Riders Inc. (MDR) is a board governed non-profit corporation dedicated to ensuring sustained off road riding in a family based atmosphere.  Through respect, teamwork and dedication it is our hope to give a unified voice to off road riders in the province of Manitoba.

The name Manitoba Dirt riders originated in 2007 as a Facebook page that promoted race schedules for MX and harescrambles from across Manitoba, Saskatchewan, and North Dakota. 2008 saw the birth of the Wheat City Cross Country team.  Mike Vodon, Chris Jebb, Marshall Askew, Gerald Bos, and Brent MacDonald (current MDR President), would travel down to harescrambles in North Dakota put on by KTM Cycle Hutt.  At the Melita MMA race they saw a poster for a hare scramble in Tuelon, and they connected with Keith Lillies.  The group traveled to Tuelon and got stuck in the hay field as there was a torrential down pour.  The race was cancelled and rescheduled for a few months later.  They ventured back and a race happened.  Approximately 75 % of the bikes in attendance were blown up due to the water/ mud.  This was Pat Wickett's first time back on a bike in many years.  A 3rd event happened and was also rained out.

After the Peterson Coulee race, Greg Heinrichs teamed up with Mike Vodon and approached Brent MacDonald to look into what it would take to start a provincial hare scramble series. With the help of Keith Lillies, the ground work was laid out and the work load was divvied up.

Pat Wickett was asked to help  out as he had experience in Medicine Hat, and there were  many meetings.  Chris Jebb and Marshall askew made contacts with Ted Morton and Dallas Louttit and Miniota and Melita venues were secured.  In April of 2009, MDR had its first AGM in the shop at WCC.  Keith Lillie’s, Pat Wickett, Greg Heinrichs, Zoey Jebb and Brent MacDonald made up the first Board.

In 2009, the club had no infrastructure, everyone brought their own personal chain saws and pruners.  Keith bought himself a Stihl weed Wacker that the club used, and there was a work party almost every weekend.  June saw the inaugural race at Melita with 48 racers.  Miniota was next in September, and we went back to Melita in mid-October in the snow.

In 2010,  membership increased and two new venues when the Moosomin Moose Run and Wawanesa race were added to the MDR circuit.  Unfortunately both venues were short lived due to access and water issues.  Further development of the Miniota track occurred.  Peter Barg of NDL construction and Mike Vodon of WCC were the first two sponsors in the clubs history.  It was the only way the club could afford insurance.

In 2011, the momentum grew and the club started to dabble with Moto Tally.  Fender cards were our scoring method in the early days, and our volunteers had shins of steel.

2012 saw the first event at Oak Lake as well as Morden. Ron Routeledge pioneered the scoring trailer concept after the destruction of the legendary skull trailer.  Ron made Moto Tally work and it was a real game changer.  We also saw the club start to acquire some infrastructure added with a trailer, chain saw, weed whackers and the DR Brush mower.

In 2013, MDR board members were involved in political liaison, attending many meetings to represent single track riders across the province during a climate of significant pressure to shut down riding on crown land.

In 2014,  the club continued to see significant growth. We had the addition of some new classes, and we permanently retired #22 after the tragic loss of Jonah Crookes in December of 2013. 2014 also saw the addition of the Lee River venue.

In 2015, Neil Grimes came on as our scoring coordinator.  The club's treasury system was reworked for better accountability.  In 2016, the Manitoba Cup was born. St. Lazare came onto the circuit.

In 2017, the club had it's highest attendance race with 374 riders over two days at the Morden Corn Scrambler.  2017 also saw two board members be detained by gun point while moving a trailer that was accidentally reported as stolen.  If you wonder why we spend so much on graphics, this is why.

In 2018, two new venues were added to the circuit, Fisher Branch and Birch Ski. Both new races were highly successful.

MDR would like everyone who has served a term on the board of Directors. Thank you for your service.

The success of this organization can be accredited to more people than can possibly be named.  At the core of the Manitoba Dirt Riders is a community built on the backs of good people, who are willing to put the greater good of this community first - the volunteers offering their unique skill sets in order to take make the club the best it can be. Thank you for enduring the heat, rain, dust and sometimes risky conditions you put yourselves in at every single race.