Well folks, it’s closing time, one last call for alcohol so finish your whiskey or beer…you don’t have to go home, but you can’t stay here! That’s it for the 2019 Manitoba Dirt Riders season which marks our 11th year of off-road racing in the province of Manitoba! To think we only had 48 members and 2 venues all the way back in 2008 when the club first started, to grow to over 300 members and 6 venues with lots more in sight 11-years later really makes us proud and all the hard work worth it!

2019 was another unforgettable season, we kicked our season off on May long weekend at the Oaklake dirt drag which was a first in MDR history holding a race on a long weekend and it couldn’t have worked out better! Thanks to the support of Kurt McCullagh and his team at Quarry Ridge Racing who were our entertainment sponsor this year we were able to kick our season off in style with a karaoke party on the Sunday night that was nothing short of pure gold entertainment lol Miniota’s devils drop was our second stop of the 2019 Manitoba Cup, unfortunately mother nature didn’t cooperate which seemed to be the trend of this season, we had to cancel racing on the pro loop for the Saturday fun race but ended up having a team relay on the Sportsman loop that was lots of fun and excitement! Round #3 led us to Fisher Branch Rock’s N Logs which is always a spectator favorite, we battled extreme heat but luckily there’s a pretty sweet swimming hole to cool down in when we were done riding for the day! With 3 races in the books that marked the halfway point of our season and summer break! Round #4 was Morden’s corn scrambler which was brought back on the circuit after resting it in the 2018 season. Thankfully the rain JUST missed the track on race weekend and made for some awesome racing! Round #5 brought us out to the St. Lazare outlaw scramble aka “ Mud-fest 2019 ” needless to say mother nature hammered the track with rain the entire week leading up to the race and made for very challenging track conditions to say the least, it definitely separated the men from the boys! Our 6th and final round of the season was out in Melita at Sandy Oaks Raceway. Yet again mother nature didn’t cooperate, we seen significant precipitation but thankfully the track is all sand and made for unreal track conditions and even better racing! Overall, we had another great season of racing! There was lots of blood, sweat, and tears poured into the hard-fought battles this season for the championships which made for very exciting racing! We would like to congratulate all the champions on their grit and determination throughout the season, your championships are well deserved!

This season wouldn’t have been possible without the loyal support of our amazing sponsors! Our club would not be what it is today without them! Mike Voden and his team at Wheat City Cycle in Brandon stepped up huge this season as our series sponsor and we can’t thank them enough for everything they’ve done for our organization over the years! Our weekend sponsors played a vital role in the success of our season as well and they were as follows:

As most of you know, our community meal is a staple in the MDR Community, and this season was no different. We had excellent turnouts and more than enough food to go around thanks to the membership stepping up! Having a master chef on hand as our President, Brent Macdonald went above and beyond the call of duty again this season with everything from chicken, to beef to pulled pork we ate like kings! We can’t thank Greg and Jody Buhr from GWB auto sales enough for stepping up this season and not only being our community meal sponsor but our water sponsor as well!

Safety is the Manitoba Dirt Riders top priority and we would like to thank Fouillard Steel Supplies Ltd. for being our medic sponsor for the 2019 season as well as Gerry D and his team for keeping us safe out there. Unfortunately there were a few very serious injuries this season and we would like to extend very heartfelt wishes to all the riders and their families on a fast recovery especially Tye Beischer who has a long road of recovery ahead but we look forward to seeing him back on the bike next season!

We had strong support from our partner sponsors as well and they were as follows:

Last and certainly not least to the people that run the show and make it all happen our amazing board of directors and volunteers!

We are happy to announce that everyone will be returning to the board for the 12th Manitoba Dirt Riders season in 2020!

Our race weekend coordinator Val Bugera with her right-hand man Colin Scarfe did an exceptional job in the scoring trailer for their inaugural season at the helm. Our volunteer coordinator which was a new position for this season was Lauraine Berard who did a fantastic job of streamlining all our volunteering. To our track owners and the families that prep our tracks, to the people who run the gate, set up and tear down the trailers, cook, carry, lift, push, sweep, lap count, help in the pits and pick up bikes! You are the true hero’s; the heartbeat of our club and we’d like to extent a huge thank you to everyone from the entire MDR Community for all your hard work this season!!!! A special mention to Kelly Mauws being awarded the Jonah Crookes memorial award for good sportsmanship and Roxanne Reimer being awarded the Catherine McCullagh memorial award for outstanding volunteerism, both very deserving of their awards and we appreciate everything you do for our club!! We’d also like to thank Russ Beaudette from RPM Graphx for another quality season of professional trophies as well as all the moto moms who captured the endless memories through the lens that will last a lifetime!

We had a successful AGM and hope everyone enjoyed themselves and had a great time at the awards banquet! We owe it all to our very own Tracy Mauws who took the lead in planning it all, she did an amazing job finding us a fun venue and the consensus was it was our best banquet yet

On a final note, as far as the 2020 schedule goes, we hope to have it finalized and release it sometime early in the new year! Stay tuned, there’ll be some big exciting changes coming for the 2020 season!!!

With that being said, we hope everyone has a great off-season! Try and stay warm and pray for lots of snow for us snowmobilers! From everyone at the Manitoba Dirt Riders organization, we hope you all have a Merry Christmas and prosperous New Year! We look forward to seeing everyone at round #1 of the 2020 season!!! 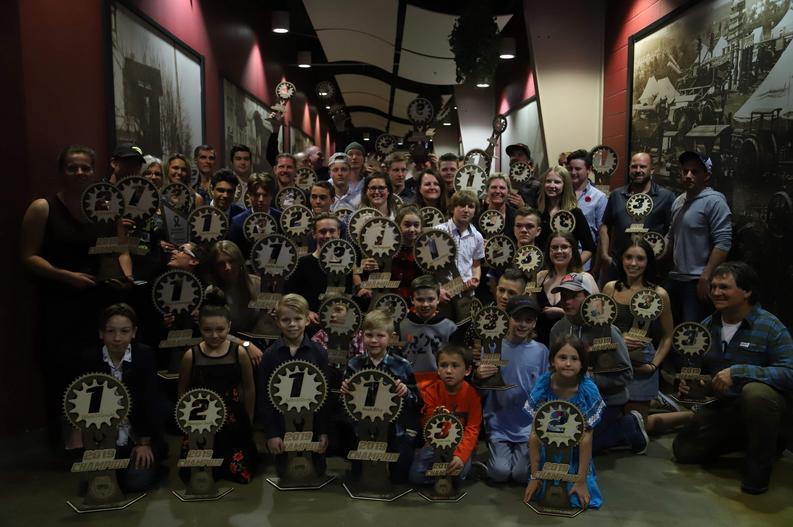